It was March, 2017, and I and my husband were looking for a place on the internet, where we could go and celebrate our marriage anniversary. My husband always wanted to see a tiger, roaming in the jungle (not in a zoo).  So, I thought, why not? The thrill of a safari ride made me gave in to his idea of Ranthambore. And we booked a room at the luxury jungle camp, Khem Villas.

Khem Villas is a gem of a place that offers a peek into the wildlife of Sawai Madhopur. It was the perfect offbeat spot for us. It’s amazing to discover a place like Khem for travellers like me, who want to ditch the so-called most-trending resorts that only offer villa-sized rooms and on-time services. Khem is different. It gives you a taste of the wild, and the stories you get to hear every day from the people who work here will never fade from your memory.

We hit the road, and it took us a couple of hours to reach Ranthambore from Gurugram. After parking our car at the villa, I asked the helper boy if he’d ever seen a tiger in Sawai Madhopur. “Madam, a tiger was spotted in our CCTV four days back, exactly where you have parked your car,” he quickly replied. I almost had terrible jitters. Surely I don’t want to be eaten by a tiger!

At the entrance, I met Mittal Gala the naturalist, who took us around the property. Soon, I realised that if I genuinely want to explore nature, I need to spend some time with her as she seemed to be fearless and knew amazing facts about nature.

At Khem, you will only be served vegetarian food (mostly organic), and all the rave reviews you read about their food on Trip Advisor are true. The food served here is not just tasty, but the menu (comprising multiple cuisines) is divided in such a way that you will never eat the same item again. I was already impressed after our first meal in the mess area.

So, the next morning, it was our time to experience our first safari ride ever! The pressure of spotting a tiger was high! It was 5.45AM, and I saw foreigners and other tourists with their individual blankets wrapped around them. Some of the travellers were spotting birds or a planet through a powerful set of binoculars that Digvijay the young naturalist had (you don’t want to miss talking to him, if you want to see the local birds, stars and the planets). 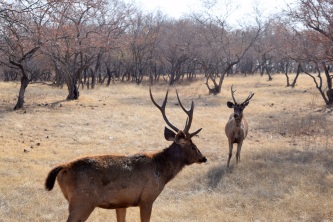 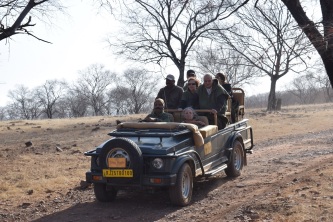 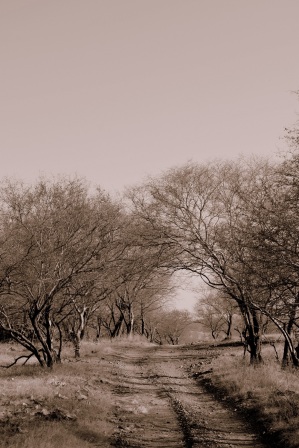 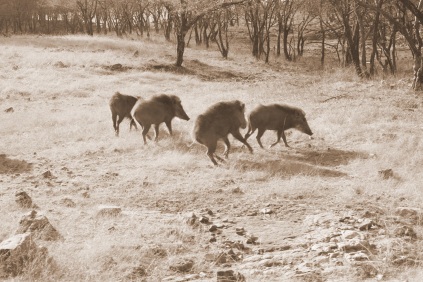 My husband is the most calm person I know, and unlike most of the restless travellers, he gave me a suggestion right before our safari began. “Just enjoy the ride. Don’t be disappointed if we don’t see the tiger. It’s all about the wildlife experience, and that’s why we are here.” The bitter fact was, nobody was interested in seeing the deer or the monkeys; all tourists came here to see the tiger. What he said actually made sense to me later.

I clearly thought in my head that our chances were anyway less, as our canter bus was filled with a chatty group of tourists who couldn’t stop cracking stupid jokes on each other! But, guess what? After about two hours, we saw Krishna the tigress, who was sitting on the ground, hiding in the bushes, and was about to sleep soon. I couldn’t believe our luck. The talkative crowd on the bus? I didn’t mind them on our way back.

During our evening snack time near the bonfire area, Usha Rathore, the GM and CEO of Khem Villas, shared interesting bits of information with us. She said that Machali, the ever-so famous tigress of Sawai, breathed her last here at Khem Villas. Usha pointed out the exact place. Machali was here for more than 15 days before she passed away. Fateh Singh Rathore, Usha’s father-in-law, was known as the tiger man. He had made a huge impact on the conservation of the local tigers here; and they say, even the tigers knew him well. “He had a flirtatious nature about him, and may be, because of this, tigresses like Machali liked him in return,” said Usha, with a broad smile.

So, usually, during the bonfire time, we get to see the stars with all the chirping of the local birds and tourists sharing their experiences with one another. But, I’m a food person, and I couldn’t stop munching on the crispy and hot momos and onion fritters that the waiter boy served us. 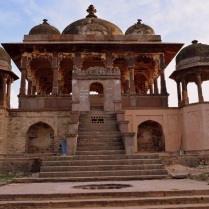 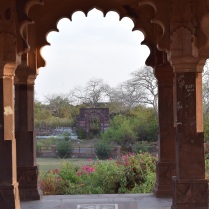 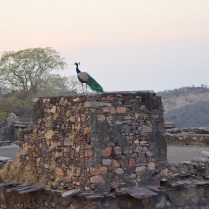 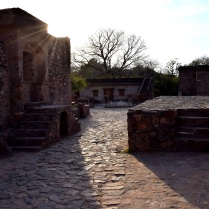 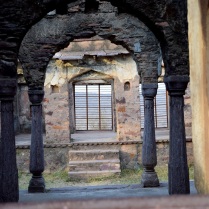 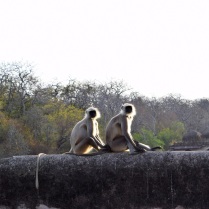 Next day, a guide from Khem Villas took us to the local fort and temple. Babu bhai, the guide, took us to every nook and cranny of the fort, and I had to actually stop him from talking so much, as he couldn’t stop sharing historical facts about the place! It was amazing to hear his stories, though. “How come you don’t have any fear of the tigers?” I asked him, while he constantly checked for the alarm calls from the monkeys and other animals here and there. Babu bhai said that he already had an encounter with the tiger, and since then, he doesn’t fear the big cat. “Just keep looking the tiger in the eye, and you’ll be safe,” he added.

After our fort tour, we settled for yet another delectable dinner which comprised the crustiest apple pie in the world! We had two more days to go. Although we did spot Krishna in our first safari tour, I wanted to see her walking or drinking water from one of the lakes. My greed was clear. And soon, our last night at Khem Villas came by. We didn’t spot any tiger in our last two safari rides, but, I really didn’t want to leave.

We had booked a normal room for two nights, but for our last night, we were upgraded to a luxury tent by the manager. 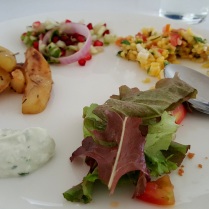 Enjoyed the vegetarian fare to the hilt!

Was accompanied by a Bulbul for my breakfast 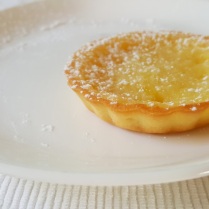 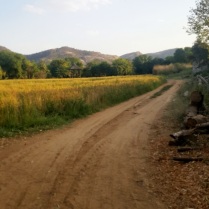 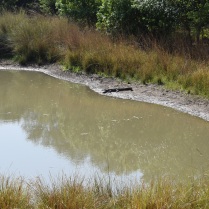 There are so many crocodiles at Khem!

We were at the bonfire area where I caught up with Usha, and asked her where she came from, and she replied, “Actually, I grew up in Udaipur. I still remember, my first few nights as a newbie wife in Sawai Madhopur. You won’t believe, we had our honeymoon in the jungle! I remember, one night, we were in the middle of the jungle, and we had to sleep in a jeep in the open jungle. After some time, I stopped fearing the wildlife. In fact, now, I can’t live in the city! I get agitated by all the noise pollution, and it’s in the cities that I’m afraid to sleep in. Who’s scarier than us human beings? You tell me.”

Usha surely was trying to help me as I struggled with the idea of sleeping in the tent. Most people I assume would have liked it. But the truth was, unlike my husband, I couldn’t imagine myself sleeping calmly in the tent.

Many scary thoughts came up in my mind when I walked my way to the tent late after dinner, in pitch dark. I quickly rolled the canvas fabric down that served as a door. After an hour of reading, we turned off the light. I was trying hard to sleep, but, then, I heard an animal walking towards us. I knew I won’t be able to sleep in the tent after that minute! My husband also heard the noise from the animal, but he was too sleepy to think about it. I had no option but to call Usha for help around 12 in the night.

“Hey! Sorry, all our rooms are booked. But, you can sleep in my room,” it was the naturalist, Mittal, holding a glass lantern, outside our tent. I quickly tip-toed outside the tent and held her hand, tightly. “Do you need a room as well?” she asked my husband. “No. I’m all right. Just take her along with you,” he said in a cool manner. And, I went to a room inside the building.

I was pretty embarrassed next morning. “There was a cat near your tent. You had forgotten your cookie tray outside on a table. She ate the cookies and ran away. You thought it’s a big animal that will eat you up,” the naturalist said. “A tiger was also found walking in the mess area,” she quickly added, with a straight face. And, my heart skipped a beat.

I bid Khem Villas farewell with some great unforgettable memories. After leaving the property, we shopped a few items made by the local women at Dastkar next door.

While driving back, I wrote a text message to the naturalist, thanking her for all the help. “The next time you come here, you will explore the insects and worms in the greens,” she texted me back. “No. I’m afraid of them,” I quickly reverted. “Okay. Butterflies and birds?” came her reply. “Yes! I would love to!” I wrote back.

If I had stopped overthinking, I could sleep in the tent that night. After reaching home, I kept thinking about the people who worked at Khem Villas. I could hear the monkey calls (actually made by our society dogs) that were considered alarm calls of a tiger or a leopard nearby there. But, did I feel safe in the house? I don’t know.

3 thoughts on “An Indian Safari”